Strickland Hall, has had a chequered history. From the 1540s being tied in to the Crackenthorpe’s of Newbiggin Hall, briefly (we believe from hearsay) to the Strickland’s of Sizeurgh Castle and latterly to the Lowther Estate. We are tracing its history as time allows. We have found the archives at Carlisle Castle, passed on by the Lonsdale estate, a fascinating and invaluable resource. This page is effectively under construction, please bear with us as we research and add to the history as time allows.

Still so much to discover

During the Suppression of the Monasteries, the last abbot of Shap Abbey surrendered to Henry VIII’s men on 14 January 1540. On the 6th November 1543, Henry VIII then granted this estate, with many others, to Christopher Crackenthorpe of Newbiggin Hall. It was built/extended by his second son, John Crackenthorpe.

After four generations, John Crackenthorpe died in 1594 and the property was sold to John Pattinson of Thrimby, before passing to the Lowther estate. The Morland Registers, beginning in 1538, denote that John Crackenthorpe had an heir, Christopher (died 1630). The manor of Little Strickland passed to his son Richard (died 1672). 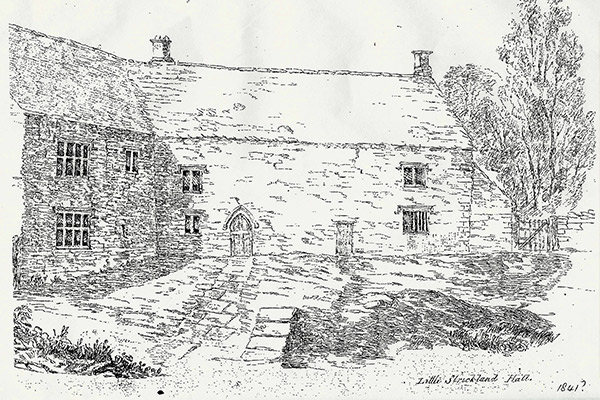 Thereafter, it is uncertain whether the Crackenthorpe family were resident at Little Strickland. During this period, the family appear to have fallen on hard times, as it is recorded that the house was sold (9th September 1634) to John Loather of Hackthorpe for £280 18s 4d.

By 1671, Sir Daniel Fleming noted that “Thos Fletcher Esquire, hath a good house and estate” and was the owner of Strickland Hall. However, this contention was challenged by Daniel Scott who intimates that the Fletcher family acquired the Hall but did not live there (Scott 1912, 118-119).

The abstract of the tithe of the Rev’d John Fisher to Little Strickland, Low Hall (D/LONS/LS/1/36/25) denotes that Richard Crackenthorpe was resident in 1716 until at least 1737.

However, the estate was mortgaged by Crackenthorpe and Lord Viscount Lonsdale to Mr William Herbert of Kendal on 28th February 1716 (D/LONS/L5/36/25). By 1841, John Hodgson was resident at Strickland Hall as a tenant farmer, his descendants finally leaving the Hall in the 1970s.

By 1861, confirmed from the Church tithe records of that year, we know that Low Hall was a tenanted farm on the Lowther estate. At that time, the part of the house we believe dates from the 1400s, the middle part of the down stroke of the ’T’ was still in domestic use.

Sometime after this, it passed into agricultural use, housing animals on the ground floor with fodder above. The whole building finally passing back to, or into, domestic use between 2010 and 2012. The current owners have refurbished the building, retaining fantastic historic features throughout.